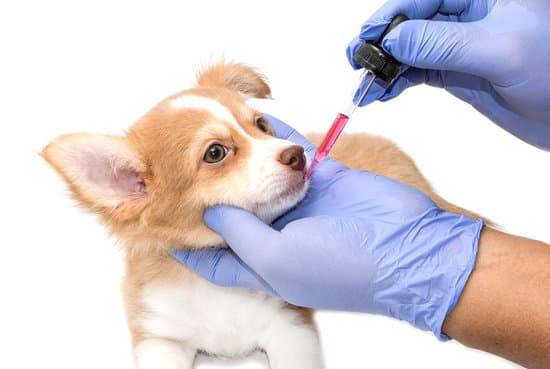 With the pet CBD market industry exploding globally, it’s no surprise that we need to look out for any drug interactions. What many people don’t know is that dog CBD oil can interact with other medications by either enhancing the effect, or by interfering with the metabolism of some.

In this blog, we’ll discuss why it’s important to consult with your veterinarian first before using CBD pet products.

Not only is this important so that you can get a proper diagnosis for a medical condition, but your veterinarian will be able to discuss any possible side effects if CBD is used together with other pet meds.

Here’s what you need to know to fully protect your pet, and to make sure that there are no drug interactions.

CBD can alter the way your dog processes certain medications

Yes, although cannabidiol (CBD) is a natural supplement that is beneficial for numerous health conditions in pets, as well as for chronic pain, insomnia,depression, and anxiety, CBD does have the potential to interact with certain medications.

CBD is derived from the hemp plant, yet it can also come from the marijuana plant. CBD hardly ever contains delta-9-tetrahydrocannabinol (THC), which is the compound that gives marijuana its “high” effect. High-quality CBD is non-toxic and considered safe for pets and humans alike.

There are almost no side-effects, apart from those coming from a low-quality CBD oil that may contain contaminants. It’s always best to look out for the compromised quality of some CBD oils.

You’ll need to discuss with your veterinarian all supplements, over-the-counter meds and prescription meds that your pet may be taking. Today research continues to demonstrate how effective CBD oil is for pets, yet one still needs to examine how it can interfere with the metabolism of pet meds and other supplements.

Benefits of CBD Oil for Dogs

Cannabidiol (CBD) extract is quickly gaining popularity as a natural alternative for managing pain, inflammation, and a variety of medical conditions, including epilepsy. However, recent reports have called into question the safety of CBD when used together with other pet meds. It’s also good to note that using a compromised quality or low-quality CBD oil raises the risk of side effects.

A recent 2019 study by the University of Korea, demonstrates that the CBD anti-cancer protein shows potential in killing tumor cells. The researchers tested the synergistic effect of CBD with a cancer destroying protein called TRAIL. (TNF related apoptosis- inducing ligand.)

The study concluded that TRAIL and CBD created apoptosis separately in colorectal cancer cells. The researchers also found that together, both reduced cancer cells a lot.“To the best of our knowledge,” they wrote, “this is the first report that cannabidiol induces significant TRAIL-induced apoptosis of colorectal cancer cells,” noting that earlier reports suggested that a different protein response was responsible for cancer-cell death.” via MDPI Journals.

The FDA has also tested the chemical content of cannabinoid compounds in some of the products, and many were found to not contain the levels of CBD they claimed to have. We have also heard reports of CBD potentially containing contaminants (e.g., pesticides, heavy metals); we are looking into this.

Some cannabis products are also being marketed as pet food and health products for animals. The FDA has not approved cannabis for any use in animals and recommends pet owners talk with their veterinarians about appropriate treatment options for their pets.” via FDA, 2019.

High doses of  CBD oil may potentially drop blood pressure resulting in lightheadedness and possibly dizziness in people. It’s always best to consult with your veterinarian for the best advice prior to purchasing a CBD product. That said, the positive side of CBD oil use is that it may be good for patients with high blood pressure. CBD together with regular exercise and a healthy diet help to regulate hypertension.

A 2017 study by Dr. K Jadoon on CBD and its effects on blood pressure demonstrated the following:

The study concludes that “acute administration of CBD reduces resting BP and the BP increases stress in humans, associated with increased HR. These hemodynamic changes should be considered for people taking CBD. Further research is required to establish whether CBD has a role in the treatment of cardiovascular disorders.”

A  study researching CBD interactions with seizure meds in people added that “Because all of the participants are also taking other seizure drugs while they are receiving the investigational therapy, investigators checked the blood levels of their other seizure drugs to see if they changed. "With any new potential seizure medication, it is important to know if drug interactions exist and if there are labs that should be monitored while taking a specific medication," said lead author Tyler Gaston, MD,” via Science Daily.

Dr. Gaston and her colleagues found that there were significant changes in levels of the drugs clobazam (and its active metabolite N-desmethylclobazam), topiramate, and rufinamide in both adults and children, and zonisamide and eslicarbazepine in adults only.

Except for clobazam/desmethylclobazam, however, the drug levels did not change outside of the normally accepted range. In addition, adult participants in the study taking clobazam reported sedation more frequently.

Very high ALT and AST indicate abnormal liver function, but significant ALT and AST elevation occurred only in a small number of participants (4 children and 1 adult), and the levels returned to normal after discontinuation of valproate and CBD.”

The study concludes that “The findings emphasize the importance of monitoring blood levels of antiepileptic drugs as well as liver function during treatment with CBD. "

A perception exists that sinceCBD is plant based, that it is natural and safe; and while this may be mostly true, our study shows that CBD, just like other antiepileptic drugs, has interactions with other seizure drugs that patients and providers need to be aware of," said Dr. Gaston.” 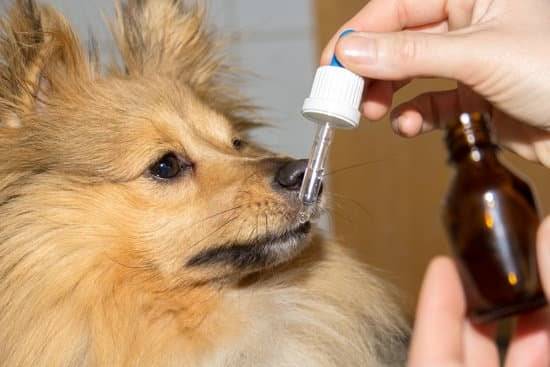 CBD as a natural supplement does not cause a “high” in pets, but may cause a reaction when used together with anti-seizure meds. Cannabinoids have been shown to inhibit  cytochrome P450 enzymes by using up these enzymes, and by inhibiting how other enzymes work.

When cannabidiol oil is consumed by dogs in large amounts, a large group of enzymes may be altered in the same way that grapefruit alters enzymes.

Most pet meds are metabolized in the liver via certain enzymes that are made in it. CBD works in the same way that grapefruit does, and may use up all the enzymes and also alter the effectiveness of pet meds.

Non-Steroidal Anti-Inflammatory Drugs (NSAIDs) are a class of drugs commonly used to control pain and inflammation in dogs. NSAIDs help many dogs lead a life that is more comfortable for them, but what about interactions with CBD oil? CBD oil has the potential to make pet meds less effective.

That said, pet parents should take every precaution to ensure that there are no interactions with any of their pet meds or supplements, and even NSAID’s, corticosteroids, pet herbal supplements and vitamins. The potential for adverse reactions will also depend on the body chemistry of your pet and the dose of the prescription or supplement.

Administer CBD oil 2 hours before or 2 hours after giving pet meds or supplements.

NSAID’S include the following:

Meds like Gabapentin when taken together with CBD can cause lethargy in pets. It’s important to discuss CBD use with your veterinarian prior to administering.

Common corticosteroids include the following:

CBD oil can also enhance the effectiveness of certain drugs and one may be able to lower the dose of pet meds or therapy when using CBD oil. Pet meds that are used for pain relief need to be administered carefully when using them together with CBD oil.

CBD may be beneficial in numerous ways in the treatment of cancer, as well as for helping with the side effects from conventional cancer treatments. Because CBD contains antioxidants, it may also reduce tumor progression.

Research has shown that CBD may improve the effectiveness of chemotherapy. There is also additional research that demonstrates that CBD sets offTRPV2 channels, and thus makes cancer cells more responsive to chemotherapy. Another study showed how rats that had pancreatic cancer fared better when administered with CBD instead of only chemotherapy.

Before purchasing or using a CBD pet product with your dog, discuss it with your veterinarian first. Today, there are still numerous issues with CBD products. Finding a high-quality CBD pet product needs to be first priority. It should be hemp-derived, from a reputable pet company/brand, and also formulated especially for pets.

There are numerous methods for the analysis of cannabinoids, yet there is still no standard agreed upon analytic method that is used to test accuracy and suitability. That said, here are the problems today that cannabinoid analysis faces:

Another interesting study in the Netherlands on Dutch CBD oil demonstrates this!

“In this study, 46 different cannabis oil samples were collected directly from patients and analyzed for cannabinoid content. The obtained samples were home-made (n = 29) or purchased from a (web) store (n = 17). For 21 of the 46 products (46% of all samples), label information was available on CBD/THC content, so that the claimed content could be compared to the analyzed content as determined in the study. Results are shown in Table1. In many cases the analyzed cannabinoid content strongly differed from the claimed content on the label, while in 7 samples no cannabinoids (CBD or THC) were found at all. Such deviations were found in home-made as well as commercially obtained products,” viaKarger.

As a pet parent, you want to do the best you can for your furry best friends. That said, consider consulting with your veterinarian for the best advice regarding CBD, and doing all your research ahead of time.

With so many awesome pet CBD brands out there, purchasing the right CBD brand for your pet should be a no-brainer. Just remember that when using it together with pet meds, it’s best to triple check to make sure that your pet meds don’t interact in a bad way and that they’re just as effective when combined with CBD oil. 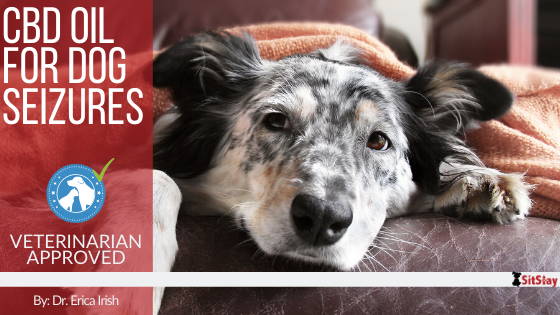 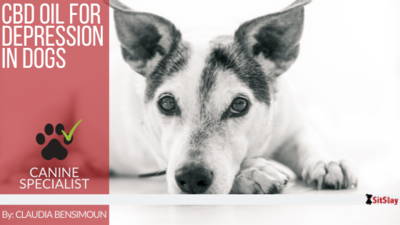 CBD Oil for Depression in Dogs 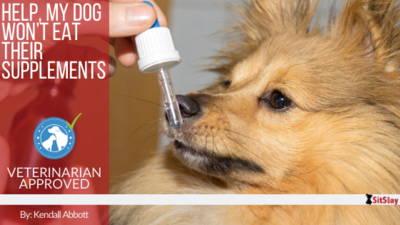