How to Prevent Ticks on Dogs 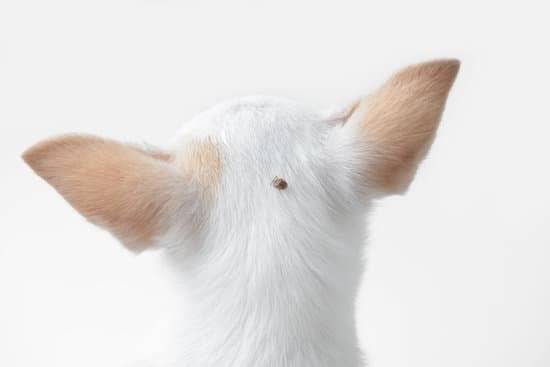 Ticks are one of the most nefarious kinds of ectoparasites that are located in numerous parts of the world. Many different species of tick can be present in your neighborhood or even your backyard! They can feed off of humans and animals, including your canine companion. What happens if a tick bites your dog? Will he get sick, and what are some ways to prevent ticks from biting?

Although most people think of ticks as insects, they are actually  arachnids which makes them related to spiders. The average tick has a small, flat, and oval body-shape with eight legs. They can range from two to five milometers in size but can get closer to ten milometers wide after they’ve fed.

Ticks feed on blood from animals and humans. They are typically located in dense, woody forests or areas with tall blades of grass. Ticks are not able to jump like fleas, so they climb to the tops of grass blades and wait for a host to brush past. The tick will then drop from the blade and fall onto their host.

Many species of ticks exist, and they are located throughout many parts of the United States, especially in the Northeastern, Midwestern, and Southern states. Examples of tick species include the following:

What diseases can ticks spread?

There are numerous different illnesses  that ticks can spread, and many of these tick-borne illnesses cause similar clinical signs such as fever, lameness, joint pain, and lethargy.

Anaplasmosis is one such tick-borne illness that is spread by both Western- and Eastern-black-legged tick species as well as the brown dog tick. In some cases, dogs who are bitten by these ticks may also experience vomiting, diarrhea, and coughing.

Many veterinarians carry SNAP tests that can detect anaplasmosis with just a few drops of blood. Treatment usually consists of oral doxycycline for four weeks plus medication for joint pain, and recovery is excellent with prompt therapy.

Babesiosis is also spread through tick bites, but there are also many reports of transmission through direct animal-to-animal contact, e.g. through bite wounds. Small protozoans make their way into the bloodstream and cause rupture orhemolysis of the red blood cells, resulting in severe life-threatening anemia.

Special blood testing may be necessary for diagnosis, and treatment usually involves a combination of anti-parasitic and antibiotic medications.

Similar to Colorado Tick Fever in humans, Rocky Mountain Spotted Fever is caused by ticks like the Rocky Mountain wood tick and the American dog tick. Signs include joint pain, fever, abdominal pain, swollen face or limbs, and lethargy. Bleeding problems such as nosebleed and focal hemorrhages of the gums and eyes are also possible because of the way that this bacteria increases the risk of anemia and blood clotting problems.

Ehrlichiosis is another bacterial illness transmitted via tick bites. The brown dog tick is the main carrier but other ticks like the Lone Star tick have also been responsible forEhrlichia infections. Clinical signs are similar to those seen in cases of anaplasmosis and Rocky Mountain Spotted Fever, but in some cases, dogs can be asymptomatic carriers.

They cannot pass it on to other dogs unless a tick bites one dog and then the other, and asymptomatic carriers can still show up positive on the SNAP tests provided by veterinarians. Asymptomatic dogs should not be treated, and symptomatic dogs will need oral doxycycline for four weeks.

Hepatozoonosis is caused by ingesting a Gulf Coat tick or a brown dog tick, and each tick carries a different species of theHepatozoon protozoan. Once the tick is ingested by a dog, he will either develop bleeding problems in the digestive tract or large, painful muscle cysts. The gastrointestinal version from the brown dog tick can be treated but the muscle cyst version from the Gulf Coast tick cannot be completely cured.

Lyme disease is a bacterial illness that is transmitted through bites from black-legged ticks. It is one of the most widely known tick-borne illnesses because it causes a “bullseye” lesion in people, but this is not the case with dogs.

Besides fever and joint pain, Lyme disease can also cause kidney failure and, in severe cases, has been documented in cases of fatal myocarditis in Boxer dogs. Dogs can be asymptomatic carriers, but symptomatic dogs will require doxycycline and supportive care depending on their signs.

How to prevent ticks latching onto your dog

Ticks can hide in areas where you might not readily see them on your pup. This includes inside the ear canals, in between toes, under their legs, and even in unusual places like on their gums! Try to check these areas after your dog has gone for a walk through woody areas or places with tall grass.

Ticks tend to love warmer weather, so hotter months of the year will increase the risk of tick bites for your dog. However, one species of tick – the brown dog tick – can actually invade your home! This is why year-round tick preventive products are important.

The best tick prevention products are the ones you can purchase from your veterinarian. Many of these products fall into the isoxazoline drug class and can kill ticks within a few hours of biting, thus preventing the spread of disease.

Repellant products like topical oils and collars can also increase the chances that ticks won’t bite your dog, but these products lose their potency quickly. In areas with lots of ticks, you may need to combine oral products with repellant ones!

Be sure to schedule routine visits with your veterinarian, at least twice a year, and report if your dog is exhibiting any unusual signs. Most veterinarians also carry a vaccine for Lyme disease. It is highly effective after two boosters and is still recommended for dogs who have already had Lyme disease because reinfection is possible.

Tick-borne diseases can cause severe illness, and treatment is most effective when it is administered as soon as possible. By checking your dog regularly and using effective preventive products, you may be able to prevent painful and expensive diseases altogether! 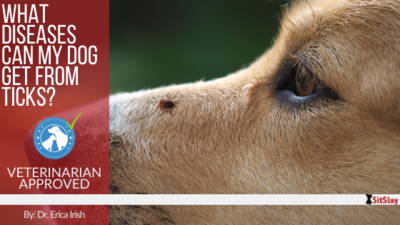 What Diseases can my dog get from Ticks? 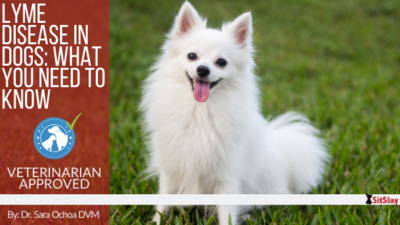 Lyme Disease in Dogs: What you Need to Know 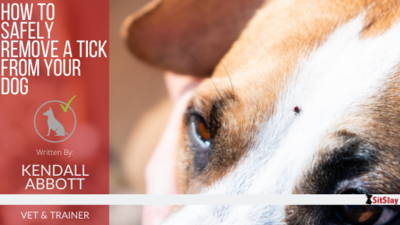 How to Safely Remove a Tick from your Dog